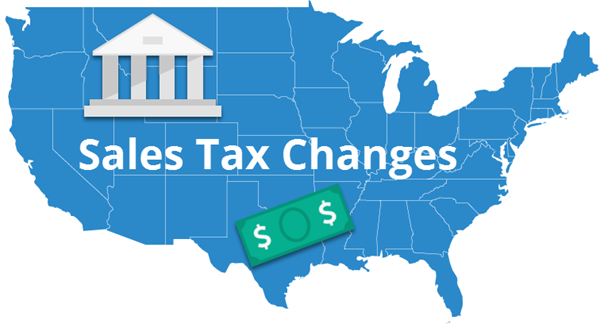 Important Note: None of the below information is tax or legal advice. Please consult your accountant or legal counsel for specific answers to your situation.

As a merchant selling online in 2019, you should plan to collect and remit sales tax for purchases from customers in all 50 states. And for some states, you may already have this requirement!

After switching majors in college to Economics, I had a full year to finish my thesis. I laboriously wrote it on consumption tax policy and tax reform. The main argument was instituting a sales use tax to replace an inefficient and convoluted income tax system would benefit all.

Since then I’d like to say tax laws have simplified or improved, but with the advent of internet sales we seem to be moving in the wrong direction again. From what was previously a legal grey area for tax nexus creation by out-of-state retailers, now to an onerous sales tax collection requirement with different rules in each state.

Previously each state differed on when they considered a merchant to be creating a physical location in the state, a nexus, based on online sales and enforcement of tax collection was sporadic at best.

For many of my agency’s merchants in the affiliate channel, I kept a close watch on sales to nexus states. As an example, California law said as long as merchants weren’t directly soliciting residents a nexus exemption was granted; as long as a signed non-solicitation agreement was kept on file annually.

Amazon, to their credit, fought the sales tax legal battles for years in dozens of states before capitulating once they decided to open distribution centers for Prime Shipping on most goods fulfilled by them.

As quick background for those not familiar, in June of last year The United States Supreme Court ruled 5-4 in South Dakota v. Wayfair that states can mandate businesses without a physical presence in a state collect and remit sales taxes on transactions in the state.

Overturning the Court’s 1992 decision in Quill v. North Dakota and 1967 decision in National Bellas Hess that prevented nexus creation simply by selling in a state online.

Generally, this Supreme Court ruling is now being adopted as a revenue model by all states to apply to any online merchant with more than 200 transactions or $100,000 in sales over a 12-month period.

As states with large budget deficits begin adding their own version of the South Dakota internet sales tax law, a problem has quickly come to light of every state, or even county and city, having their own individual tax rates and remittance procedures.

Beginning December of last year, for example, the Colorado Department of Revenue required all businesses who sell goods to customers in their state to assess sales tax based on the customer’s address, not the location of the business.

Cities in Colorado are allowed to set their own sales tax rates and there are 344 different taxing jurisdictions in all with some categories of goods being exempt. Even worse there are 2 counties and 72 municipalities who collect their own sales tax, not the state, with their own requirements and remittance systems!

Or take California’s new Use Tax that went into effect April 1st and has already been amended due to public push-back on the remittance burden. A retailer in the preceding year who has total combined sales for delivery to Californians that exceeds $500,000 now has to collect and remit sales tax.

There has been no federal precedent or laws passed as I would’ve suggested be done in my thesis from all those years ago. Until this happens, expect a minefield of legislation at the state level that will be burdensome to even medium-sized retailers.

If downloading tax databases at the state level isn’t your idea of a fun work-week, one solution is an automated tax compliance solution like Avalara. Many eAccountable merchants take advantage of their services both to collect and, more importantly, remit sales tax correctly nationwide. (Note: I do own Avalara stock, but have no agency relationship with them.)

Or shopping cart providers like Bolt Checkout that include both fraud protection and sales tax collection as selling points. eAccountable is a Bolt partner and demos are available for anyone interested.

There can also be ancillary benefits for those merchants who were previously wary of their status with tax laws. By collecting sales tax, recruiting affiliates from those states into those affiliate programs is again possible. Illinois, California and New York are examples.

The internet sales tax advantage is gone and every retailer now needs a plan in place to protect their businesses as tax laws are dramatically changing around the country.

Reach Out to See How eAccountable Can Help Your Business

eAccountable’s marketing consultants are standing by to discuss your digital marketing needs and show how we can help grow your business online.

We use cookies on our website to give you the most relevant experience by remembering your preferences and repeat visits. By clicking “Accept”, you consent to the use of ALL the cookies.
Cookie settingsACCEPT
Manage consent

This website uses cookies to improve your experience while you navigate through the website. Out of these, the cookies that are categorized as necessary are stored on your browser as they are essential for the working of basic functionalities of the website. We also use third-party cookies that help us analyze and understand how you use this website. These cookies will be stored in your browser only with your consent. You also have the option to opt-out of these cookies. But opting out of some of these cookies may affect your browsing experience.
Necessary Always Enabled
Necessary cookies are absolutely essential for the website to function properly. This category only includes cookies that ensures basic functionalities and security features of the website. These cookies do not store any personal information.
Non-necessary
Any cookies that may not be particularly necessary for the website to function and is used specifically to collect user personal data via analytics, ads, other embedded contents are termed as non-necessary cookies. It is mandatory to procure user consent prior to running these cookies on your website.
SAVE & ACCEPT