See the Data! What Happened When an Online Retailer Stopped Affiliate Marketing for Two Weeks

eAccountable has been in the digital marketing agency and affiliate marketing space since 2000. During this time, we’ve seen clients go through a variety of significant business issues ranging from bankruptcy and closing up shop overnight, to unexpectedly firing the ecommerce lead – or even the entire marketing department.
Recently, one of our client’s suddenly asked us to pause an affiliate marketing campaign that had generated $1M+ in trackable revenue during the 12 prior months.
The client’s reasons behind this pause were twofold: 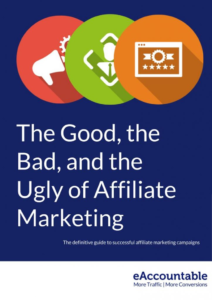 Want to learn more about affiliate marketing? Get our eBook, The Good, The Bad and the Ugly of Affiliate Marketing.

Reach Out to See How eAccountable Can Help Your Business

eAccountable’s marketing consultants are standing by to discuss your digital marketing needs and show how we can help grow your business online.

We use cookies on our website to give you the most relevant experience by remembering your preferences and repeat visits. By clicking “Accept”, you consent to the use of ALL the cookies.
Cookie settingsACCEPT
Manage consent

This website uses cookies to improve your experience while you navigate through the website. Out of these, the cookies that are categorized as necessary are stored on your browser as they are essential for the working of basic functionalities of the website. We also use third-party cookies that help us analyze and understand how you use this website. These cookies will be stored in your browser only with your consent. You also have the option to opt-out of these cookies. But opting out of some of these cookies may affect your browsing experience.
Necessary Always Enabled
Necessary cookies are absolutely essential for the website to function properly. This category only includes cookies that ensures basic functionalities and security features of the website. These cookies do not store any personal information.
Non-necessary
Any cookies that may not be particularly necessary for the website to function and is used specifically to collect user personal data via analytics, ads, other embedded contents are termed as non-necessary cookies. It is mandatory to procure user consent prior to running these cookies on your website.
SAVE & ACCEPT